Monument to Freedom and Unity, Berlin 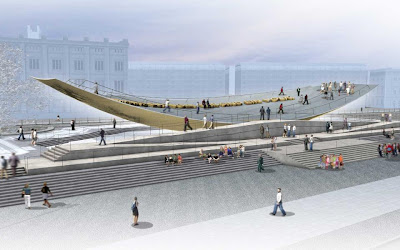 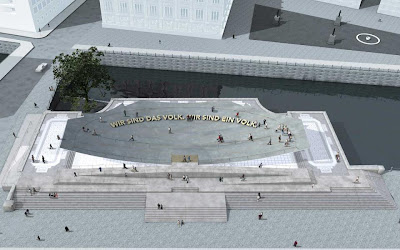 "The final decision for the design of the National Monument to Freedom and Unity in Berlin has been reached: The collaborative concept by designers Milla & Partner, Stuttgart and Berlin choreographer Sasha Waltz will be realized. This concept was one of three awarded equal first prizes by the jury in the first round in October 2010. In the final round the concept now convinced conclusively. The concept is entitled "Citizens in Motion" - a message that Sasha Waltz and Milla & Partner convey in an unexpected manner. The monument is animate and is not to be approached merely as an object for contemplation - the intention is that it be entered and set in motion, movement being achieved by visitors working together as a group: The design was created in a spirit where, by means of creative action, each is enabled to bring benefit to the community and as a consequence shape society. The visitors themselves - the citizens who set the whole in motion - comprise an active constituent of the monument. The vision is that it will be a continually changing choreographic expression of the Peaceful Revolution of 1989. As the design is both aesthetically ambitious and subject to stringent structural requirements, Milla & Partner and Sasha Waltz involved Stuttgart engineers Leonhardt, Andrä and Partners as expert consultants."
via Milla & Partner