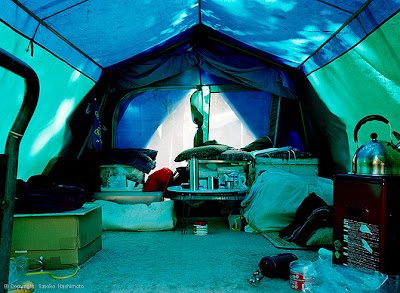 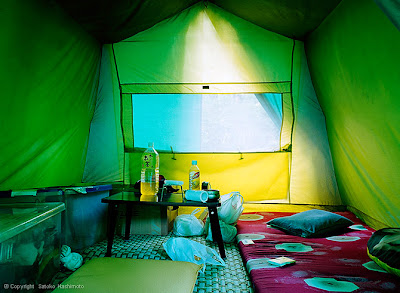 Lately I have seen a documentary on TV of Ueno Park and its homeless inhabitants. They live illegal in Tokyo's central park because they earn too little money to pay Tokiyo's  extreme rents. They are tolerated to stay unless they move their tents when there are ceremonial occasions or offical visits. The economic crisis of 1990s has led to a boost of homeless people in Tokyo. Many people have lost their jobs and often were too proud to ask for help. They ended up living on the street. Today there are many improvised huts scattered all over Ueno Park in Tokyo.
Photographer Juergen Specht's former assistant Satoko Hashimoto documented their life style. She lived in the park for some time and got the permission to take photos of the interior of their tents. Her photos show how important it is for men to have private shelter.

Email ThisBlogThis!Share to TwitterShare to FacebookShare to Pinterest
Labels: Photos